The brilliant poet Sylvia Plath's battle against post-war sexism and her attempt to juggle writing and motherhood resonate uncannily with our own age of unresolved structural gender inequalities, brought into sharp relief by the COVID pandemic.

Art
I write only because
There is a voice within me
That will not be still
--Sylvia Plath
I first discovered Sylvia Plath when I was seventeen, in the library of the Henrietta Barnett School in London, where I was studying for my pre-university science "A" level exams. I had pulled a copy of her autobiographical novel The Bell Jar off the shelf and was bewitched by this coming-of-age story of near-suicide and resurrection. Decades later, I am equally bewitched by Red Comet: The Short Life and Blazing Art of Sylvia Plath, Heather Clark's captivating, beautifully written biography of this brilliant young poet and her all-too-brief life.

In Red Comet, Clark draws on all of Plath's surviving letters, her unpublished diaries and calendars, as well as her published work. But what makes this biography so powerful is that the author places Plath within the context of her times: the post-war, post-Holocaust, early-Cold-War United States (and later, Britain) where Plath struggled against the sexism of her times to be recognized for what she was: "the most gifted woman poet of [her] time," a genius whose poetry represented "a totally new breakthrough in modern verse," to quote the critic Al Alvarez.
That I discovered Plath only after I had passed my English "O" level exams at age sixteen reflects the sexism that was still rampant in the 1980s. For "O" level English Literature, we were assigned an anthology titled Poets of Our Time, which included ten poets, all of them men (and notably Plath's husband, Ted Hughes) but not a single woman poet. So I knew of Hughes, whose pike-and hawk poems I had assiduously penciled all over, but nothing about Plath. Until I read The Bell Jar.

One-third of my way through her novel, I came upon a passage that resonated with me then and now.

I saw myself sitting in the crotch of this fig-tree, starving to death, just because I couldn't make up my mind which of the figs I would choose. I wanted each and every one of them, but choosing one meant losing all the rest, and, as I sat there, unable to decide, the figs began to wrinkle and go black, and, one by one, they plopped to the ground at my feet."
As a young woman growing up in an Orthodox Jewish community, I too faced pressures to choose between marriage, career and adventure. But those tensions could not compare to the misogyny that Plath faced. "She hoped to be a writer, wife, and mother, but she was raised in a culture that openly derided female artistic ambition," Clark writes. At her commencement ceremony at Smith College in 1955--where Plath graduated summa cum laude despite a recent suicide attempt and brutal electroshock treatment--Democratic presidential candidate Adlai Stevenson gave a speech titled A Purpose for Modern Women. The best way these brilliant graduates could contribute to their nation, Stevenson said, was to embrace "the humble role of housewife, which, statistically, is what most of you are going to be whether you like the idea or not just now--and you'll like it!"

Despite this discouragement, "Plath pursued her literary vocation with a fierce, tireless determination," Clark notes, sending and re-sending her poems and short stories to magazines and publishers, undeterred by early rejection. Her brilliance emerged early. She published her first poem at age eight and later vowed to become "The Poetess of America." Defying periods of suicidal depression, she was imaginative, energetic, enormously well-read, and also a talented artist: some of her vibrantly-coloured paintings appear in this biography.

Plath was also politically engaged and deeply concerned about the threat of nuclear war. Two weeks after her daughter Frieda was born in 1960, she took her baby to an anti-bomb protest in Trafalgar Square organized by CND, the Campaign for Nuclear Disarmament. She wrote to her mother Aurelia that she had wept as she had watched the marchers file past, "proud that the baby's first real adventure should be as a protest against the insanity of world annihilation."

And yet. At the same time that Plath was striving to pursue her own calling as writer and poet, she was also diligently typing and re-typing Hughes' poems and sending them out to publishers - while taking care of the housework and later their two children. In 1958, when both Plath and Hughes were pursuing freelance careers, Hughes would hector Sylvia about her cooking and writing - while she remained stolid in her support of him. "No criticism or nagging," Plath wrote in her journal on September 11. "Shut eyes to dirty hair, ragged nails. He is a genius. I his wife."

During a stint at the writer's colony Yaddo in 1959, Plath was for the first time in her life "completely free of both academic and domestic obligations," Clark writes. During previous stretches of uninterrupted writing time in Benidorm, Boston and Cape Cod, "she had been responsible for the cooking, shopping, cleaning, dishes, laundry, ironing, mending, typing, bookkeeping, and the myriad other tasks that fell to women in the 1950s."

But today is so different for women, isn't it? Not exactly. As I was reading Red Comet, I was struck by the similarity between the struggles Plath faced in the 1950s - juggling writing and childcare, striving to be a good wife to her "genius" husband, ensuring her house was immaculate - and some of the similar balancing acts that women face today.

In the US, in 2020, women still spend about four hours a day on unpaid work, compared to 2.5 hours for men. During the COVID-19 pandemic, women lost more than 64 million jobs globally, and were more likely to drop out of the workforce to take care of children or other family members. In the U.S., Black and Hispanic women, especially, "suffered some of the steepest spikes in unemployment since the pandemic began." As a result of pandemic job losses, many in poorly paid, informal or precarious sectors such as tourism or social care, an additional 47 million women worldwide "are expected to fall into extreme poverty, living on less than $1.90 a day in 2021."

According to US Census Bureau data, mothers who continued to work during the pandemic have had to reduce their work hours at a rate five times greater than fathers, either because they work in service jobs impacted by pandemic lockdowns, or because mothers carry a heavier burden, on average, of unpaid domestic household chores and child care.

I am myself familiar with this clash of responsibilities, as I struggled to complete assignments during school closures mandated by multiple lockdowns and quarantines. At the same time, I also had to contend with feelings of guilt over my dread of home-schooling. (While I enjoyed taking my children to the woods to look for flowers and beetles, I have no talent for teaching fractions.) Yet it also seems ungrateful, or churlish, to complain about spending time with my children, whom I love so very much.

Perhaps that's why I felt so inspired by Plath's own drive to carve out time to write. During the break-up of her marriage with Hughes in the summer of 1962, she wrote to her therapist Dr. Ruth Beuscher, "I am damned if I want to sit here like a cow, milked by babies. I love my children, but want my own life. I want to write books, see people and travel...I refuse the role of passive, suffering wife." In October of that year, she wrote to poet Richard Murphy, "I am writing for the first time in years, a real self, long smothered. I get up at 4 a.m. when I wake, & it is black, & write till the babes wake. It is like writing in a train tunnel, or God's intestine."

During the month of October 1962, Clark writes, "Plath wrote almost a poem a day--one of the most extraordinary literary outpourings of the twentieth century ... Plath lifted the veil to reveal ugly realities about her own life, and her society. She filled these poems with images of torture, murder, genocide, war, suicide, illness, revenge, and fury--but also spring, rebirth, and triumph."
What struck me on reading Red Comet--and re-reading The Bell Jar, as well--was that Plath was often very funny, witty and good-humored: the opposite of the suicidal melancholic with whom we're so familiar. In 1961, she wrote that British magazines were full of recipes "for things like Lard & Stale Bread Pie, garnished with Cold Pigs Feet." In an interview with the BBC in 1962, she laughed when she recalled that on her first visit to an English home, her host offered her, at bedtime, "the choice between a hot-water bottle and a cat." Just a few months before Plath took her own life in February 1963, she recorded an interview with Peter Orr of the British Council for a series called The Poet Speaks. To his comment that she, as an American poet, "straddled the Atlantic," she replied, laughing, "that's a rather awkward position, but I'll accept it."

That interview with Peter Orr, in which she read a selection of her recent-written poems (including The Applicant, Lady Lazarus, Nick and the Candlestick and Daddy) is absolutely worth a listen, for Plath's voice vibrates with enthusiasm and joy. At the grand age of thirty, she talks of how, "now that I've attained, shall I say, a respectable age, and have had experiences, I feel much more interested in prose, in the novel." She speaks of her desire to say her new poems aloud.  "I feel that this development of recording poems, of speaking poems at readings, of having records of poets, I think this is a wonderful thing, I'm very excited by it. In a sense there's a return, isn't there, to the old role of the poet, which was to speak to a group of people [...] to sing to a group of people."

But it's her dedication to writing that really chimes with my own sense of solace in having the time to write, free of interruption, in silence and in solitude. Indeed, I almost felt as if she were speaking to me directly of the absolute necessity of writing, whether it be poetry or prose. When Orr mused that poetry writing "has been a great satisfaction to you in your life," she responded, "Oh, satisfaction! Yes, I don't think I could live without it. It's like, you know, water or bread, or something absolutely essential to me. I find myself absolutely fulfilled when I have written a poem, when I'm writing one [...] the actual experience of writing a poem is a magnificent one." 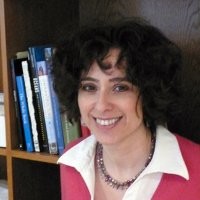 Words by Josie Glausiusz
Josie is an award-winning freelance journalist writing about science and the environment for magazines including Nature, Scientific American, Hakai, Undark, Aeon, Sapiens, and National Geographic.