A Statement to the Court by a First-Time Lawbreaker

Anthea Lawson was arrested for protesting in London with Extinction Rebellion against Government action on climate change. Here she shares the statement that she read in court.

Environment
Earlier this week at City of London Magistrates Court I pleaded guilty to a criminal offence: a breach of Section 14 of the Public Order Act 1986, by sitting on Waterloo Bridge and refusing to move during the Extinction Rebellion protests in London in April this year.

This felt like an extraordinary thing to do: both doing it in the first place, and then appearing in a court to be sentenced for it. (The sentence was a six month conditional discharge plus court costs.)

I’m sharing here the statement I made to the court. It seems unlikely to have made any difference to the outcome: there were nine of us in court together, all pleading guilty. Some made statements and some didn’t, and we all received the same sentence, which, with so many of us being prosecuted for the same offence, had no doubt been decided in advance. But still, it was an opportunity to speak my mind, and so I did. Here is what I said:

“I am pleading guilty to the offence with which I am charged, for reasons that are to do with not taking up more time, either my own or the court’s. But I would like to say a bit about why I did it.

“I have great respect for the rule of law, and have always lived by it. My mother was a magistrate for twenty years, and I grew up to respect the authority of the state. I trained as a journalist and sat on the reporters’ bench observing court rules in what I wrote for my newspaper. I lived and worked in Sierra Leone shortly after the end of its civil war and saw, first hand, the appalling consequences when the rule of law fails entirely.

In May a World Wildlife Fund report found that nature is being eroded at rates unprecedented in human history.

“My work, for a decade after that, was for an organisation that investigated corruption in the natural resource industries: oil, diamonds, timber. I used my investigations to call for the law to be used against the bankers and company executives who were facilitating corruption — a form of corruption that decimated the health and education budgets of some of the poorest countries in the world. I proposed new laws where there were gaps; I was in and out of the Treasury; I was in years-long conversations with the Economist and the Financial Times lobbying for a new regulation on disclosure of the real beneficial owners of companies, that is now becoming law in, at the latest count, 42 countries.

“So it is a measure of the seriousness of the situation that I have been willing to break the law as part of a protest. I have not done this lightly. I have felt extremely uncomfortable throughout the process of protesting, arrest, custody and now standing here before you. I know that I have caused difficulties for those who encountered the protests, and for the legal system.

“But what I did feels like the only thing left to try. I am talking here about the existential threat posed by climate change and species extinctions to life as we know it. I’m talking about failing harvests, mass deaths, the breakdown of civil order. The conclusions of the Intergovernmental Panel on Climate Change last October are available for anyone to see, and have been widely reported. ‘Limiting global warming to 1.5°C would require rapid, far-reaching and unprecedented changes in all aspects of society,’ said its summary for policymakers last year. This means CO2 emissions need to decline by about 45% from 2010 levels by 2030, to reach net zero by 2050. That’s the figure of 12 years, as a deadline to turn things round, that is being talked about.

We should be mobilising rapidly to change our energy use, change the way we build houses and design cities, change our transport habits, change how we grow and transport food, in ways that go far beyond what individuals or families can do themselves.

“Also widely reported are the rates of wildlife decline. In the same month, October last year, the World Wildlife Fund reported that 60% of the world’s vertebrate animals have been wiped out since 1970 — that’s in my life-time. Professor Robert Watson, an eminent environmental scientist and chair of an intergovernmental panel on biodiversity, said that the destruction of nature is as dangerous as climate change. The panel’s report in May this year found that nature is being eroded at rates unprecedented in human history. One millions species are faced with extinction.

“And yet there is no commensurate action from the government. Faced with information like this, we should be mobilising rapidly, as the IPCC report suggests, to change our energy use, change the way we build houses and design cities, change our transport habits, change how we grow and transport food, in ways that go far beyond what individuals or families can do themselves. But it is not happening. On the contrary, the government continues to subsidise fossil fuel use; to approve a third runway at Heathrow.

“A troubling dimension of these threats is that they are already present for those who have long been on the sharp end of a colonial and then globalised economic system. People in the poorest countries in the world are already experiencing drought, flood and destruction from the climate change that is already happening.

“I have spent twenty years doing lawful campaigning. I have marched, written letters, organised coalitions of hundreds of organisations, lobbied in the corridors of the UN during international negotiations, researched and published reports, run press offices for campaign groups, written op-eds in major newspapers, appeared as a commentator on the BBC, Sky News, Al Jazeera, testified to Parliament here and to a Senate inquiry in the US.

It is now clear that what we need, to ensure the survival of life on earth, is far more than such tweaks; we need a complete overhaul of how we live, how we power our lives.

“I know from this experience how difficult it is to achieve change. And the change I was trying to achieve, when I was doing all those things, was not as threatening to the fossil fuel-powered status quo as what we now need to do. I was asking, then, for tweaks to our economic system; to make it slightly less abusive in its impacts, to make it play a bit more nicely.

“But it is now clear that what we need, to ensure the survival of life on earth, is far more than such tweaks; we need a complete overhaul of how we live, how we power our lives. And the difficulty of obtaining even those tweaks that I achieved, the resistance from those who benefit financially from the status quo, tells me that we don’t have time to apply these methods to such a greater challenge.

“When I sat down on Waterloo Bridge with Extinction Rebellion, I have never been clearer about what I was doing. I understand that we caused disruption that caused difficulty, and I am sad and sorry for that. I do wish that it was not necessary. I understand that in taking these actions I have taken police and court resources that are needed, pressingly, elsewhere, and I am sorry for that, too.

“But I also note that a decision has been made to prosecute everyone involved for this small offence. It was reported last week that only 1.5 per cent of accused rapists are now being prosecuted in the UK. Yet one hundred percent of the people who are trying to preserve life for our grandchildren, for our brothers and sisters in other countries who are already struggling with drought and deluge — one hundred percent of us are being prosecuted.

Somebody has made that decision. It appears to be a political decision, made to deter protest.

“Somebody has made that decision. It appears to be a political decision, made to deter protest, and I can only speculate about whether it was made by people who have not yet lowered their psychological defences to take on board what we need to do, together, to protect our grandchildren and great-grandchildren.

“But I made a decision, too: to take action in the service of life; to be a good ancestor; to sit on Waterloo Bridge; to be standing here today, however uncomfortable it feels."

Did the judge listen to our statements? It’s hard to say. He was looking down during the first couple of statements of the nine of us who were there, apparently attending to papers on the desk in front of him — or did he not want to look up? I didn’t want to let him do this, and deliberately tried to maintain eye contact with him the whole time I was speaking. My sense, observing him as a human animal, is that he, as a fellow human animal, on some level heard me, but I can’t rule out wishful thinking here. My view is that it’s all worth saying, and we have to keep saying it. Every interaction we have around the subject of our lawbreaking — whether with the newsagent or our children’s teachers or the judge who is sentencing us (or the chap I sat next to on the train on the way home who was reading over my shoulder as I typed this up) — holds the potential to break the bystander effect.

Big thanks to my friend Mira for putting me up in London the night before the hearing. She quite rightly asked me to explain to her children why I did what I did, and also to explain why their brown-skinned mother is choosing not to protest in the same way as her white-skinned friend: because she can’t be confident that she will be treated reasonably by an institutionally racist police force. 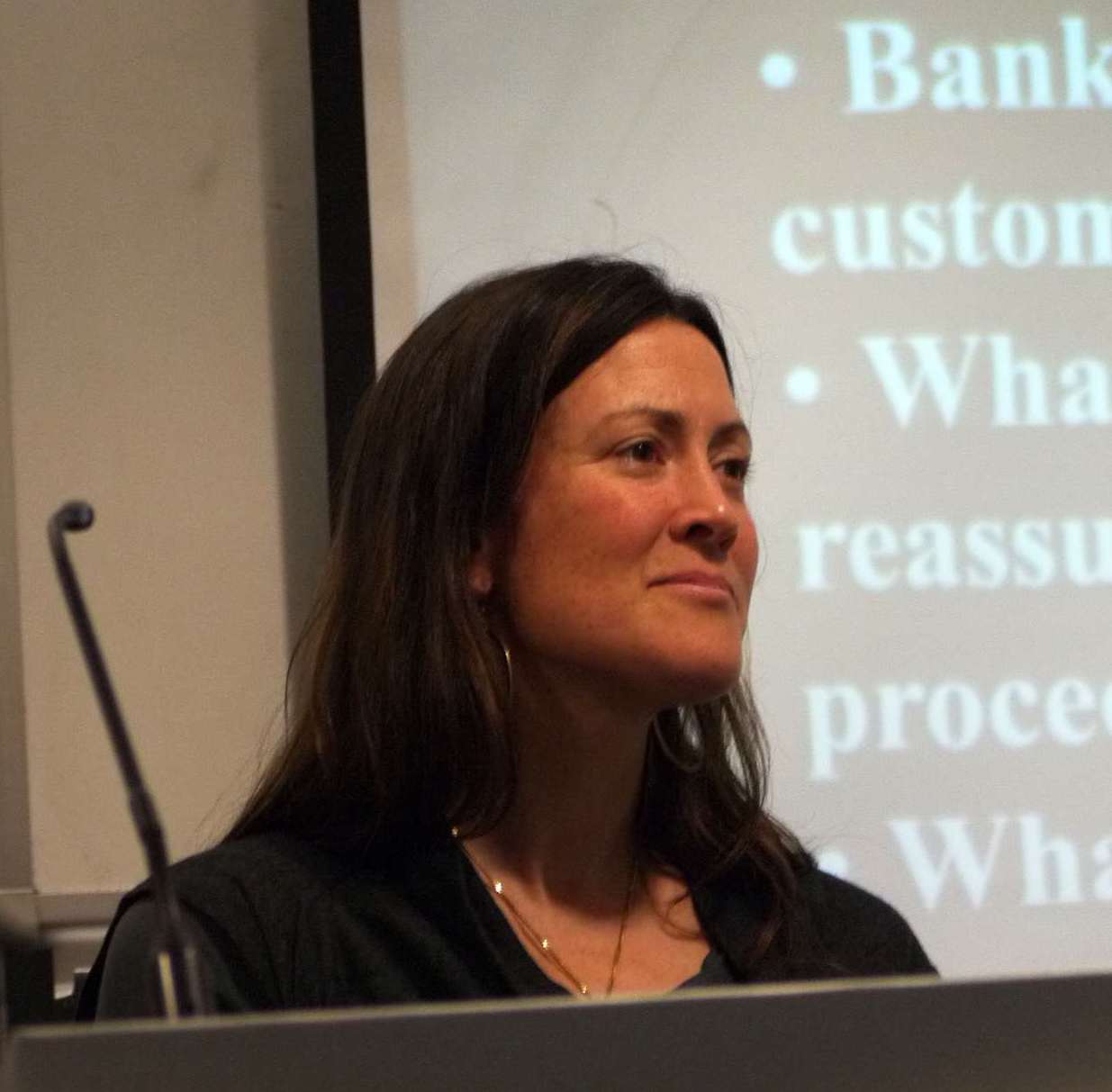 Words by Anthea Lawson
Anthea Lawson is investigating the inner life of activism with Perspectiva. She is writing a book, The Entangled Activist, to be published by Perspectiva Press.