We Need a New Story of What It Means to be Human.

It’s time to accept that an increasingly complex world, we need to adapt to more nuanced stories and resist the urge to hone in on the one that is the most black-or-white.

Society
One of the things that make us unique among our Earth-dwelling family members is our inherent need for stories.


By ‘stories’ I don’t just mean those that are fictional — I mean the stories we tell ourselves about who we are, why we are here, what we are doing, and what is important to us. Whether it’s the story of Jesus, Mark Zuckerberg or your own grandparents, stories about how we got here and how the world came to be the way it is help to give our lives fundamental meaning, orientation and direction. Storytelling is sense-making.


Humans need this. Salmon don’t have a cosmic story that they talk about. They are born into the world and they instinctively know in what direction they need to swim. It’s built into their DNA, inherent to their being. People, on the other hand, need stories that are created and expressed through culture in order for us to find our way forward.

I believe that we are in a period of story break-down, an era that Joanna Macy refers to as ‘The Great Unravelling’

Our reliance on stories to make sense of our world becomes more apparent when things happen to us that render our story incoherent. For example, when someone suffers some sort of traumatic event they often continue to suffer long after the event or danger has passed. PTSD is literally defined as being “marked by an inability to construct a coherent story of our past.”


Trauma victims are often left asking “why did this happen to me?” or “could I have done something differently?” Many people end up feeling guilty or blaming themselves when bad things happen to them, not because this is a logical thing to believe, but because at the very least it’s a story that makes sense. The idea that bad things can randomly just happen, completely out of our control, seems to be worse than believing a made-up story.

As many stories that we held so dear in our near-recent human history are unravelling, the rates of mental health problems are rising.

In the past 20 years, medical practice has increasingly recognised the importance of storytelling for the patient’s healing. It even has a name: ‘Narrative Medicine'. Many medical schools such as Columbia University now have entire Narrative Medicine programmes. On the course description for the programme at Columbia, it says that narrative medicine “fortifies clinical practice with the narrative competence to recognise, absorb, metabolise, interpret and be moved by the stories of illness.”


I believe that we are in a period of story breakdown, an era that Joanna Macy refers to as ‘The Great Unravelling'. As many stories that we held so dear in our near-recent human history are unravelling, the rates of mental health problems are rising. Things like “if I spend my life working hard everyday then I will be financially secure and happy,” or “if I go to a good University I will be successful” are no longer a given. Many young people feel they have no way of predicting what the future holds for them because many of the jobs that we do today didn’t even exist when we were at school.
Other stories which are starting to breakdown revolve around broader societal assumptions. “All technology is good, and the more technology we develop, the more our society advances” or “bottled water is better for you”. These widely accepted stories don’t make sense anymore when you take into account the mountains of electronic waste in Ghana, or the levels of plastic in our oceans. Despite this, the old (but not ancient) stories continue to live on and on in our collective imagination.


We’re in a chasm between a story that used to function and a new story which hasn’t yet gathered enough coherence to function effectively. We can respect the stories of the past, but we also realise that they often aren’t actually helping us to navigate the reality we are living in anymore. We’ve surpassed the level of knowledge and understanding that we had at the time of their creation.

In a time of greater access to information and an explosion in the choices we have in every decision, it becomes harder to cling onto a simple story that used to be easier to keep making sense.

There’s also the fact that we’ve not quite made sense of the immense power we’ve unlocked with technology, or constructed a new story that incorporates how we’d like to interact and engage with it. If technology is good, then why do so many algorithms seem to leave us feeling depressed and isolated? Can a video call really replace the full-bodied magic of spending time with someone we love? What’s the difference between a childhood spent playing outside in the fresh air and amongst the trees, and another spent on an iPad levelling up in FarmVille? These may sound like simple questions with simple answers depending on your perspective, but the truth is no one fully know the answers yet. What if computer games enhance cognitive ability? What if running on a treadmill is safer than going for a run in the city? The answers to these questions are multi-faceted and varied.
Another example of these competing stories can be found if you look at our food system. On one hand, permaculture and small-scale regenerative farming has the power to nourish soil, restore ecosystems, move us away from a dependence on fossil fuel derived agrochemicals and build up resilient farming communities. On the other, vertical farms and hydroponics have the potential to save hectares of land and cut down on transport costs and emissions by bringing fresh salad leaves into the heart of the city.

What about lab-grown meat? Its development could lead to millions of animal lives saved from the slaughterhouse and the awful treatment endured through their short lives. But what is the impact of eating meat grown in a Petri dish? Are there psychological or health impacts that are not yet known about? Why can’t we all just agree to stop eating meat altogether?

Perhaps it’s time to accept that an increasingly complex world we need to adapt to more nuanced stories.

Then comes the human layer: who owns these new technology companies? If lab-grown meat takes off, and the industry is dominated by three huge monolith companies, then what does that do to the distribution of wealth amongst humans? And what happens to the thousands of livestock farmers who are put out of business?


As an activist and scientist, I spend a lot of my time moving amongst groups of people who seem to have a very clear grasp on what they believe, but in a time of greater access to information and an explosion in the number of choices we have it becomes harder to cling onto a simple story. Perhaps it’s time to accept that an increasingly complex world we need to adapt to more nuanced stories and resist the urge to hone in on the one that is the most black-or-white. This is vital for two reasons: to prevent and reverse ecological destruction and climate change and to re-establish the role of community, empathy and cooperation among humanity.


As with the industrial revolution, it’s clear that we’re done with a certain phase of our human existence. The time is ripe for a new story, one that allows us to integrate all parts of what it means to be human today. Fundamental to this new story should be the question of how do we create communities and individuals with a sense of meaning? Where do we find our belonging? What is our purpose? What makes a ‘whole’ human being — a sense of connection, meaning, purpose, self-worth, justice, community, belonging, and a sense of love for this planet, this one short life, and humanity at large?

We’re done with a certain phase of our existence, and we’re in that exciting moment of entering into a new way of being human, which requires a new story.

It’s also important to remember that our stories define us but they shouldn’t limit us. They only exists as much as we believe in them. The new story I (and many others) envision is one that is deeply human, with nature at the forefront, and technology by our side. It is up to us to work out how these three can interact and support each other in creating an integrated, diverse and holistic future.
Humans, nature and technology - whether that be the wheel or the steam train - have been intertwined for thousands of years, but there’s no denying that modern technology is partly responsible for many of the crises we face. Technology used with awareness and responsibility has the potential to elevate the quality of life for humans worldwide. It has the potential of aiding us on our mission in this moment of cleaning up and re-building our soils, regenerating entire ecosystems, returning power to disempowered communities, decentralising power, allowing mass communication and collaboration, and actualising human creativity. I see technology as part of our transition story — but we need to create a future that works with nature and isn’t wholly reliant on techno-fixes.


How do we get there?

This piece originally appeared www.phoebetickell.com. This is an edited version. 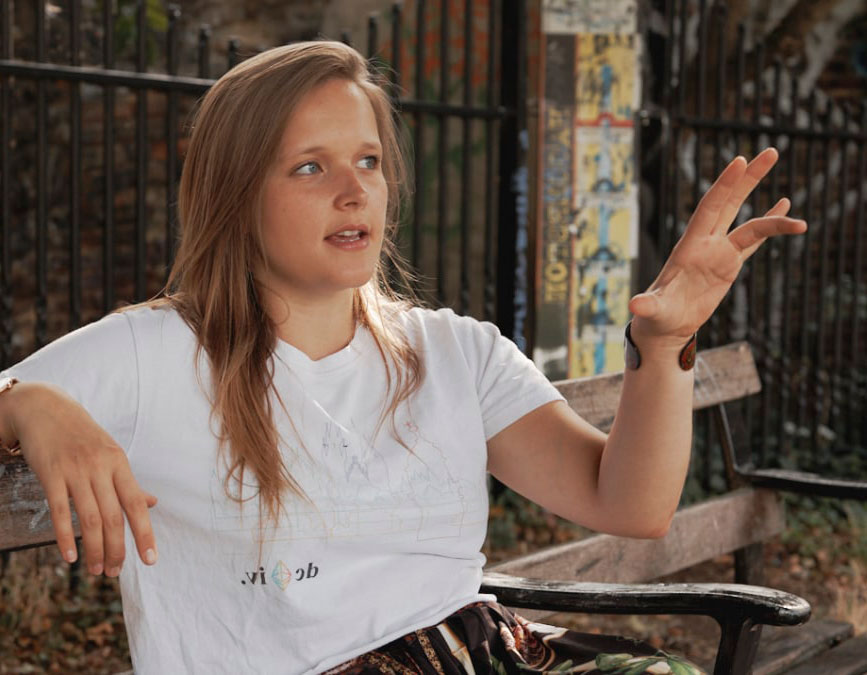 Words by Phoebe Tickell
Phoebe is a renegade scientist, systems designer and social entrepreneur, passionate about creating opportunities for transformation of people - and through that, transformation of society, and the planet.