Reports from the Kyiv Emerge Gathering

“The future belongs not to Paris, London, and Berlin but to the wild east, frontier places like Kyiv." Writer Andrew Sweeny shares his reflections from the Emerge Gathering 2019.

Emerge Gathering
I’ve just returned from The Emerge Gathering and Metamodern Arts Festival in Kyiv Ukraine, where a group of luminaries got together to answer the big question: ‘What on earth will emerge next?’.

To begin with let us depart from the prosaic. Close your eyes, then breath. Listen to what emerges in this article, without any agenda in particular …

Already you have a taste. Meta-narratives and Mindfulness. Talking about how to talk about … crisis, collapse, and opportunity.

What kind of a world is emerging? And why will it emerge here in Kyiv? Are we heading over a cliff? Or can we create the next utopia? How do we manage machine intelligence and expand human intelligence? What kind of future emergence is possible? And why Kyiv?
Thomas Bjorkman explains: “For inspiration and collective sense-making Kyiv is in many ways a frontier land. Systems change always starts at the periphery, not at the centre of a system”.

I agree with Thomas: the future belongs not to Paris, London, and Berlin but to the wild east, frontier places like Kyiv. Kyiv is not yet gentrified and therefore has the potential for real poetry.

Kyiv is caught in a dialectic between its rotting past and the shiny future it leans into.

There is something dreamlike and cinematic about this city that was once called Kiev: a resonant decay, a war between vegetation and concrete, multiple worlds and histories co-existing— an atmosphere that is both mournful and electric. Kyiv is caught in a dialectic between its rotting past and the shiny future it leans into.

The beauty of Kyiv is in the haphazard rather than the intentional—anachronisms abound. So many odd juxtapositions. A large pit where a bomb might have fallen years ago, next to an Orthodox Church built like a log-cabin. A massive abandoned grain silo hangs ominous in the air, remnants of the triumphal dreams of the communist five-year plan. An old streetcar rattles by like a relic from a miniature world, or from the gulag days and dried herring of Aleksandr Solzhenitsyn. The punk rock kids across the street make me think it is 1985. Some old Russian imperial buildings are collapsing.
In Kyiv you can walk through every epoch imaginatively: the pastoral, the imperial, the industrial, the nuclear, the utopian, the nihilistic, and the futuristic …
The Emerge Gathering takes place at the Izone Cafe next the Dnieper river in a big warehouse gallery space. There are podcasters, entrepreneurs, life coaches here. Milling around are the Rebel Wisdom guys, the Future Thinker guys, the Emerge podcast guy, and The Hanzi duo—trickster marketers of the ‘Metamodern movement’. The themes are ecology and collapse, technology and nature, spirit and body, meditation and action, psychedelia and health. There is an arts festival happening between workshops—some pretty avant guard stuff. A guy wearing a yellow sock over his face plays sampled voices on an electric guitar to cartoon copulations in front of a dripping lemon while singing in Swedish.

Speaking of Swedish, my constant companion here is the veritable philosopher and former Swedish rock star named Alexander Bard. Somebody has aptly called him, ‘The Camille Paglia of Sweden’. He’s a motormouth of erudition, provocation, and interventions. Alexander dropped out of the music industry to write dense cyber philosophy books. He is funny, warm-hearted, and antagonistic—good company. He likes to pick fights with the London hipsters and the California hippies.

It’s these kinds of conversations that make such an event worthwhile. Revelation and passionate epiphanies abound.

We discuss this ever-present word ‘meta’ and the meta-obsession with ‘meta-conversation’. It’s meta-raining outside.

“Are we going to have the conversation about how to have a conversation again!" Bard complains. “Breathe? Aren’t I already breathing?"

It seems to me that we should make our terms more poetic, even erotic. Alexander prefers Daniel Schmachtenberger’s term ‘symbiotic intelligence’ to ‘collective intelligence’. Symbiotic is salient and sexy. Roots and fungi. Living stuff. (Wilkepedia: symbiotic: involving interaction between two different organisms living in close physical association.“the fungi form symbiotic associations with the roots of plant species’).
The fungi forms, and various human symbiots (a word I just made up) head off to a Georgian restaurant. Georgian food is all the rage I am told. It is indeed delicious even though there is a taco in my salad—what’s Georgian about that? I find a nice cossack wig on the piano and put it on for the hell of it. We all drink a bit too much wine and the intellectual banter and flirtations go on through the humid night. There is nowhere else I’d like to be in that moment.

The next day my brain is a bit foggy for the collective consciousness lab. Breathe. Count your breath. Describe your experience in 3 words. Giddy, skeptical, enjoyment. Now let's get down to some co-creation. The word ‘co-creation’ makes me think a few naughty thoughts. But I have to admit, I’m in a state of symbiosis—in the mood for a bit of co-creation—even with my adversaries.

One of my apparent adversaries, Bret Cooper tells me a bit about the history of metamodernism and why it’s the next big thing. I’m not yet convinced but I admire his monomania. We are supposed to be enemies in the cyberspace jungle but it’s a relief to meet him in person. Brad thinks I am a reactionary and I think he’s a zealot. I’d like to see him dance a jig or tell a proper joke—he’d like me to get with the program. In any case, conviviality is what we need to save the world in Ivan Illich’s opinion, and I agree. The wine is good, the food is delicious, so hallelujah.

What has emerged? What has been co-created? The online avatars have now taken on flesh.

Next, I’m sitting around a table drinking beer with a buddhist cognitive scientist who is having a fight with Alexander Bard about the nature of memory. The buddhist’s girlfriend is beaming, happy that her fellow finally has somebody to fight with. You brainy buddhists need to get down in the mud, she tells us—I’m also one of those. She is moving in the opposite direction however and has a huge revelation: that she needs to study philosophy. In other words: the boyfriend needs to get down into his body; she needs to get up into her mind. It all starts to make sense.

It’s these kinds of conversations that make such an event worthwhile. Revelation and passionate epiphanies abound. This happens mostly outside the workshops, in informal circles, when we let down our social masks and risk some expression of truth. The workshops are a game—but outside in Kyiv, in that haphazard world of nighttime beauty, the true chaos of reality can be gleaned.
What has emerged? What has been co-created? The online avatars have now taken on flesh. Their perfect melodious voices, now reveal a charming duck-walk. We are all human after all. The exalted ideas, the visions, the dreams of a harmonious world—are deformed after a couple of classes of wine. People are strange, sweet, profoundly loveable. Their words are turning into flesh.

It is here on the periphery where things emerge. Yes, of course. That’s it. The periphery is really the centre. Your centre is just your own personal museum. Fuck the centre, something shouts inside me. Come out here to the liminal edge, this is the invitation. Here personas become beings, flesh replaces the digital drift, the cartesian lie, drowned in an orchestra of the sweet Ukrainian choir.

So what has emerged? Just this, only this. 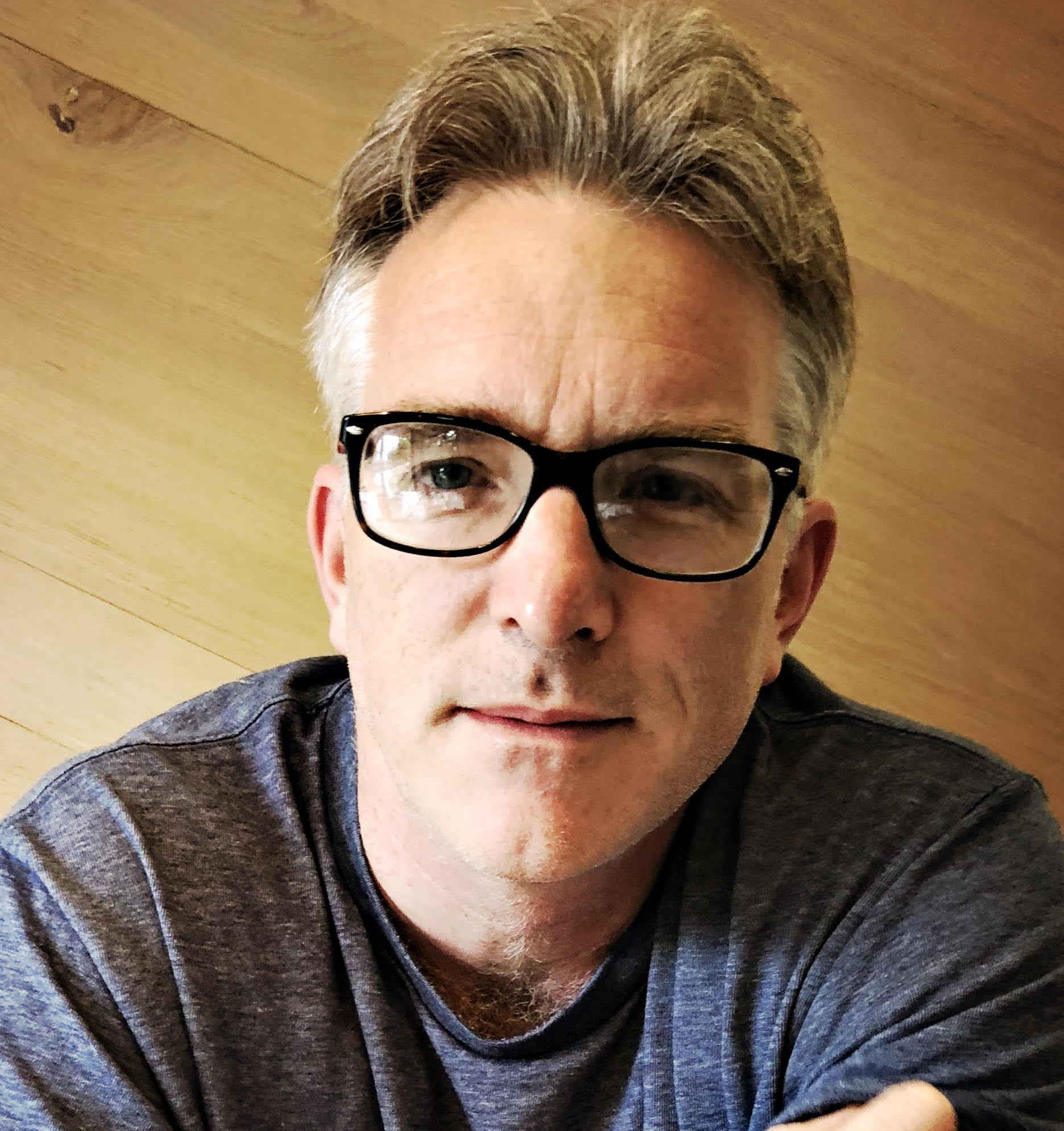 Words by Andrew Sweeny
Andrew Sweeny is a Canadian writer, podcaster, musician and author. He is currently writing for London-based media platform Rebel Wisdom as well as the German Integrales Forum. He is the host of the Sweeny Verses and co-host of Sweeny vs Bard along with the Swedish philosopher Alexander Bard. He is a lecturer on technology, media, literature, film, and psychology at several French universities in Paris. He is currently working on a study of the works of University of Toronto professor, John Vervaeke.