Gail Bradbrook, co-founder of Extinction Rebellion, explains how her psychedelic experiences helped to shape the genesis of the movement.

Environment
We are currently facing an unprecedented global emergency the likes of which our species has never seen before. This isn’t part of some hypothetical future, this is happening right now.


Extinction Rebellion is an international social movement that aims to put pressure on Governments to radically change or bring about new policies which will support the continuation of life on Earth. Our method is nonviolent resistance, and our premise is this: extinction, or rebellion? Since launching in October 2018 XR has spread to at least 50 countries across the world. In November our blockade of five London bridges mobilised thousands of first-time activists, including pensioners, teachers, families and at least one vicar.

I’d been trying to start a campaign of mass civil disobedience for years before Extinction Rebellion. I come from a coal mining family in the North of England and I’d always had an interest in social change, growing up I was part of the animal rights movement and I was 14 when I joined the Green Party. In 2010 I joined the tax justice movement and attempted to start a campaign of mass tax disobedience which didn’t quite take off. Maybe it’s my Taureun nature but I’m a bit of a bull and repeated setbacks didn’t faze me, I knew that there was work to be done and just brushed myself down and got up again. However after 8 years I felt that I was missing some vital piece of information and the ability to bring my best self forward. Stuck.

The reason why I pushed my consciousness to such extreme wasn’t just to do the inner work on myself - I wanted answers to how I could bring about social change.

Around 2016 I started to get the feeling that there was something at my core that needed addressing. Psychedelic science tells us that as medicines, psychedelics can bring about deep healing. Studies have found that they have the ability to cure people of previously incurable illnesses like depression. A big part of this is through experiencing what researchers define as a ‘mystical experience’ - people on psychedelics report a deeply felt sense of peace, oneness and unity with the planet which has been shown to have a profound and enduring effect on the way they live their lives.


Although most psychedelics are illegal in the West, it’s in the tradition of many indigenous cultures to have a relationship and dialogue with the natural world that is partly mediated through plants like Ayahuasca (a psychedelic tea made using an Amazonian vine) and Peyote (a psychedelic cactus). I don’t make decisions to fly readily these days, but I decided to travel to Costa Rica where in the space of two weeks I ingested a flood dose of Iboga (a type of tree bark), worked with Kambo (the frog medicine) and had three experiences with Ayahuasca. I was terrified, but the reason why I pushed my consciousness to such extreme wasn’t just to do the inner work on myself - I wanted answers to how I could bring about social change. What was I missing? What am I not doing? It was a specific prayer for what I called the “codes for social change.”


There was a moment during my Iboga experience where I lay down and a voice that felt very external to me said “Gail, you create your own reality”. It spoke three times. It sounds so simple but right there and then I thought “OK then, I’ll be happy.” That was the essence of my entire experience, after which I could literally feel my brain being rewired. When I got home I ended a marriage and separated my family. It was a huge decision, but it was the right thing to do and I am a stronger and happier person now.


When I arrived back to the UK I was introduced to Roger Hallam and together we began to create the movement that would become Extinction Rebellion. Roger is an academic who specialises in radical campaign design and at the end of our first meeting, which involved the sharing of lots of ideas, information and data, he joked that he had just given me “the codes for social changes”. The hairs on the back of my neck stood up.

A core part of Extinction Rebellion is the courage to acknowledge and create space for the expression of grief.

A big part of our approach has been to tell the honest truth about where we’re at as a species and ask ourselves if we are really willing and ready to face that truth. We may not be able to fully grasp the complexity of ecological science but the evidence is stark and terrifying. With heightened levels of C02 and other greenhouse gases in our atmosphere the systems that have kept our climate stable are breaking down, along with extensive damage to biodiversity through habitat destruction and pollution. Life on Earth is struggling to live in a physical reality that it was not designed for. Entire species are going extinct. Earlier this month The Guardian reported that plummeting insect levels threaten the collapse of nature. In previous mass extinctions created by huge releases of C02 (though less than we are releasing today) 97% of all life died.

There is widespread denial of the fact that we as humans are not at the top of a pyramid where we get to dictate the terms, we are part of a web of life. Even if we are able to find ways to survive on a severely depleted planet using technology, geoengineering, vat grown food and artificially created oxygen, who will decide who gets access to these life-support systems? How many wars will be waged to decide where the resources go?


And - at the bottom of it all - how many of us will survive the heartbreak of witnessing the loss of so much biodiversity. Do we really want to live in a world without the wild beauty of nature?


A core part of Extinction Rebellion is the courage to acknowledge and witness this loss and create space for the expression of grief. Inner balance is a key piece of this puzzle. It’s something that many activists fall short on, but getting yourself in good shape so that you are able to face the realities of the situation and remain strong in the face of adversity is key to this work.

Extinction Rebellion is about coming together, it’s about taking a stand and saying that we have had enough.

Supported by my experience on psychedelics, what’s made a difference for me with Extinction Rebellion is the ability and willingness to face the grief and the trauma of these times. This means bursting into tears at odd times of the day, it means creating support networks and communities because you can’t do it on your own, because you become alienated if you don’t share with the people around you how you’re feeling. Grief is an essential part of this process because there’s something about grieving that opens the space for love, which opens the space for courage - and courage will be essential in this struggle against climate change.


Extinction Rebellion is about coming together, it’s about taking a stand and saying that we have had enough. Enough of being told that we live in scarcity, enough of an economic paradigm that says that there is not enough to go around despite the fact that we live on a planet of abundance based on natural cycles, where all we need is miraculously replenished. It’s about the place in us that knows, very clearly, that we should be living differently. For many of us, this means being willing to undertake civil disobedience and risk arrest, or even imprisonment. We might not know the details but we are willing to leave this broken system behind because our courage is growing by the day and our connections and confidence in each other is strengthening all the while.


Whichever parts of this you feel within Extinction Rebellion, you are so very welcome. We could easily plunge into the denial and despair, into separation and powerlessness. Many of us feel the scarcity of our current economic paradigm and are afraid. Our challenge and purpose is to keep reminding each other that there are alternative truths and walk towards unity, healing parts of ourselves as we go and reweaving ourselves into the fabric of life.
Together we are irresistible.

Listen to a conversation with Gail Bradbrook about the past, present and possible future of Extinction Rebellion, how to orient ourselves in the face of possible human extinction and how to balance urgency and trust in activism on the Emerge: Making Sense of What's Next podcast. 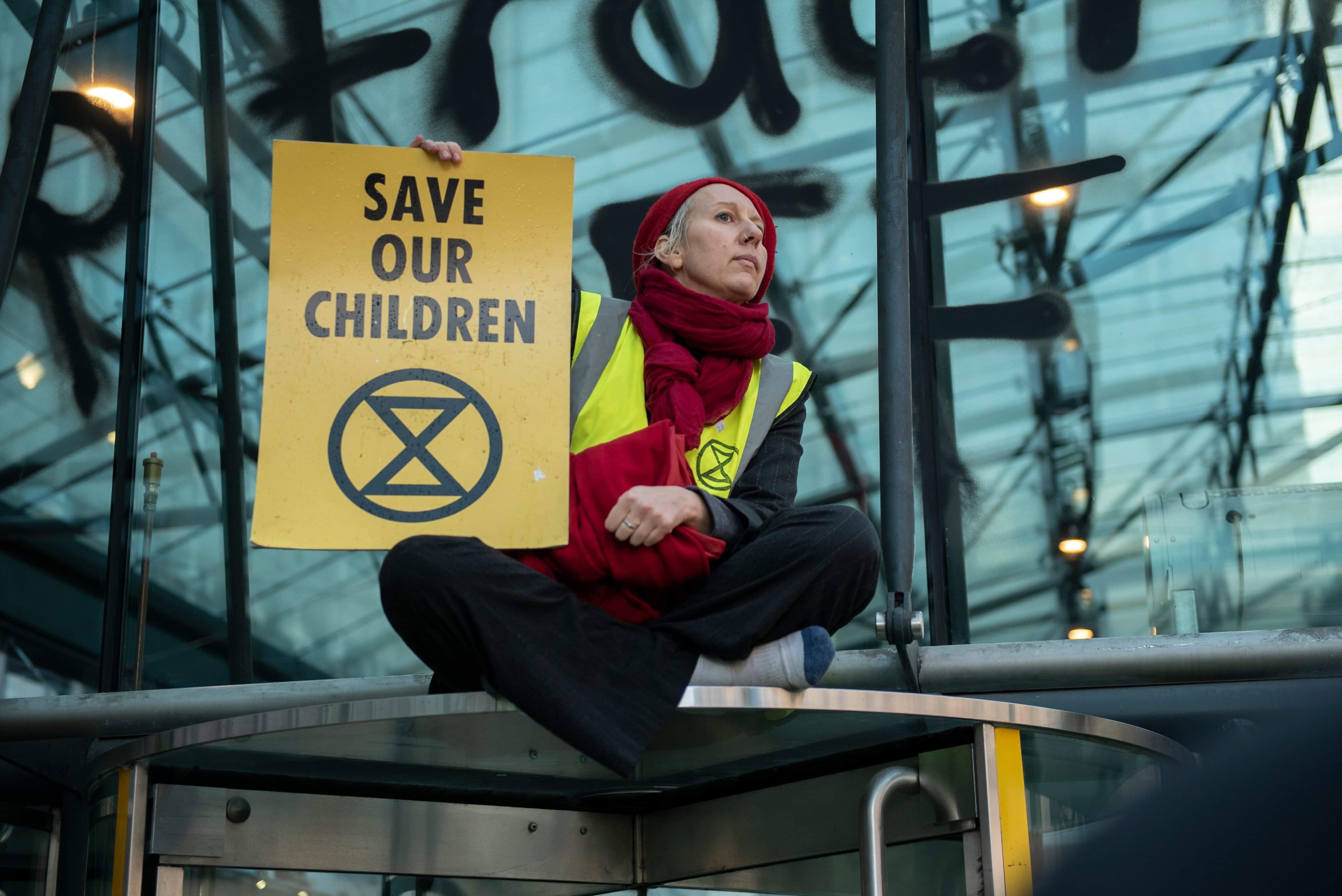 Words by Gail Bradbrook
Gail Bradbrook is the co-founder of the international social movement Extinction Rebellion.