Poetry
In an interview with evolve, education researcher Zak Stein mentioned that we live in “a time between worlds”. This phrase resonated deeply with us in the editorial team, in conversation with friends and in the evolve salons that follow each issue of the magazine.

This statement addresses a sentiment that many people are currently experiencing: An old world comes to an end when what is known, familiar and secure is extinguished. But the new world has not yet come into being. We are looking for values, ways of life, ways of dealing with ourselves, with each other and with the living world that will meet the challenges of the present. It seems that a way of life based on endless material growth, on competition and separation from each other and from nature is simply not viable. More and more people are seeing that this is the case, but we are in an in-between space and are called upon to orient ourselves in it and participate in the emergence of the new.


LANGUAGE FOR THE IN-BETWEEN
To speak about and in this space in-between we also need a new language that can hold the nuance, complexity, openness and connectedness that this space requires to come to its own potential. That’s why I think a poetic language, a poetization of our language and being is so important today. Poetry is intimately familiar with the in-between space, it originates from there, lives there. And it can only be heard in a liminal listening that dares to enter the openings between and beyond the words.


During the last weeks of the war in Ukraine, which has heightened our sense of our time as one of unpredictable dynamics, some lines from a poem by the Ukrainian poet Serhij Zhadan have been accompanying me. Zhadan has been documenting the conflict in eastern Ukraine with his texts since 2014 and is involved in social projects. He writes:


The value of a poem increases in winter.
Especially in a harsh winter.
Especially in a quiet language.
Especially in unpredictable times.
In unpredictable times, poetry leaves the safe, familiar ways of knowing and speaking and listens out into new forms of being and creating. It searches for new insights between the known, it fathoms the space between people, between us and the living world, between different ways of seeing and shaping the world. It listens for new ways of being that can give an answer to a time that is searching for itself.


Because we let go of the familiar and do not yet know the new, in-between times are always associated with very contradictory emotions. We feel sadness at the loss of the known, the creativity that becomes possible in this space of reshaping, the anticipation of the possible, the fear of the unknown. Poetry is a form of speech that has always given vivid expression to these multiple feelings. Especially times of upheaval call poetry into a new flowering. Just think of the time of early Romanticism and Classicism around 1800, when the old world, dominated by the Christian churches, was perishing and a new world had not yet been born. There were the first signs of a revolution of the free individual and the scientific exploration of nature. But equally there were the poetic breakthroughs towards a deeper creative interconnectedness as envisioned by the early Romantic poets. The many movements of the time found voice in poets and thinkers we still listen to today.


I experienced such a multi-layered transitional period after the fall of the Wall. Growing up in East Germany, I moved to Berlin at that time, which was shaking with the power of the space in-between. There was a palpable joy in me and in many people from the East that something that we not thought was possible had now actually happened. The horizon of the future seemed to open wide. But soon there were also feelings of sadness about a way of life that was lost and gone forever and that also had its meaningful sides. In addition, the hopes for a new social beginning in the East that did not mean a takeover by the West were disappointed.


This melting pot of emotions created an irrepressible creative energy that fills Berlin to this day. In some way, Berlin remained the city between the times and through this atmosphere attracted creative people from all over the world and offered a space for creating and experimenting, in which a new possible world is tried out in the most diverse forms. With all the trials and failures. Also, Berlin still stands for the potential to break through impenetrable separation into new unity. That’s also the reason why we at evolve will hold our summer retreat in Berlin.


FEARLESS IN THE HORIZON OF THE UNSECURE
We do not know how the future will unfold. Despite all the calculations, forecasts, scenarios – we don't know. But it is not easy for us humans to live with such a degree of uncertainty and insecurity. Especially in our current culture, where we want to calculate and predict everything, search for certainty and plannability, seek the unambiguous and nameable.


But insecurity, uncertainty, unpredictability can also become the gateway to a new world relationship. For much in the reality of the cosmos is unpredictable. Complex interactions weave all living things together. And we are right in the middle of it. In such a situation, we probably need an inner quality that the poet John Keats called “negative capability”. In it, we are “capable of being in uncertainties, mysteries, doubts, without any irritable reaching after fact and reason.” We live in the field of not knowing and not being able to know without withdrawing, without seeking supposed certainties or pseudo-certainties to reassure us.


Poetry fearlessly enters the horizon of the unknowable, the fuzzy. It lives there. That is why it is so significant in an uncertain, threatened time like ours. "Poetry is the language of the apocalypse," writes transformational thinker Bayo Akomolafe. “When cracks appear, when tensions materialize and split the familiar open, the least thing you need is precision. The least thing you want is to simply get to the point. Well, the poet casts his eyes beside the point, beneath the surfaces, where the exquisite sprouts.”


When we look next to the point, below the surface, we deviate from the well-trodden paths of thought and can discover and set new tracks of thinking and being. Beyond clear lines and boundaries, we may come across unexpected connections, surprising references. We leave the narrowness of fixed definitions and classifications in favor of a multiply interconnected world that opens itself up to poetic attention. Complexity researcher Nora Bateson puts it in these words:


Where Prose Stumble
Poetry asks us to look beyond words.
Asks us to seek the kind of blur where clarity is held in combining ideas.
This is important. Vital even.
The process nuances perception.
And defies algorithms.
Gobbling up rigid definitions like crispy salted snacks.
Complexity poesis.
ON THE SIDE OF RISK
But such “complexity poesis” or complexity poetry is not a mental extension of the information I can process. This is not (only) about cognitive complexity, but an existential complexity that comes into a nuanced perception. It arises from my multi-dimensional interconnectedness with reality at all levels of being in body, feelings, thought, time and space. When we are aware of this all-connected complexity, our decision-making processes also change when we figure out how to respond to our current crises, which are also complexly interrelated.


Poetry embodies in its essence the complex interaction of being. “Truth and beauty live most happily amid complexity and paradox,” writes poet Jane Hirshfield. For her, this many-faceted dynamic view is particularly evident in Japanese poetry: “The long familiar becomes the ground of the new; the precise seeds of the particular blossom into a field of suggestive fragrance; awareness of the fleeting leads to an understanding of interdependence and the continuity of being.”


Poetry knows the spaces of transition; it traverses and expands them. Poems live in uncertainty. When I read a poem, I never know what the next line will open up for me. A book of poems works from page to page with surprises and changes in time and space, identity and reference. Poetry makes our thinking and being flexible, prepares us for surprises, invites us into risk, into a complex interplay of references and meanings. “Whoever writes and reads poetry,” writes literary scholar Christian Metz, “is always already on the side of risk and challenges decisions that are contrary to our intuition, which is trimmed to security. (...) Poetry is also in this sense a forerunner of today's decision research.”


Today we are faced with momentous decisions, individually and as a society. The way we have come to our decisions so far is rooted in the mindset that has led us into these threatened times. To find new paths to a life-affirming future, we must learn to think and decide anew and, above all, to create poetically. Such a culture of decision-making will focus on our interconnectedness with the whole of existence and pay attention to the extent to which the field of living is affected. For if we seek to reshape the world with the same ways of being that have led us into threat, our activism and political engagement only reinforces and repeats the same separate, manipulative world reference. But if we learn to pause, then we can perceive the flow of the always unsecure and swellingly alive, all-interwoven existence. We listen to the living unfolding. Perhaps then the answers will come to us instead of us manufacturing them in ourselves and our thinking. Then we can decide with life for life. Whatever that means in a concrete situation. But if we carry the world listening in our hearts, we will know, even if we don't know. But in order for this, we must be ready to listen in the in-between, be aware, open, perceptive, courageous. Or as Serhij Zhadan beautifully writes: 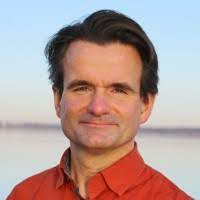 Words by Mike Kauschke
Mike Kauschke is managing editor of evolve Magazine, a translator, author, poet and facilitator of emergent dialogue. He just published his book about a poetic Art of Living in German: “Auf der Suche nach der verlorenen Welt – Eine Reise zur poetischen Dimension unseres Lebens“ (In search of the lost world – A journey to the poetic dimension of our lives). www.poetische-lebenskunst.deWebsite